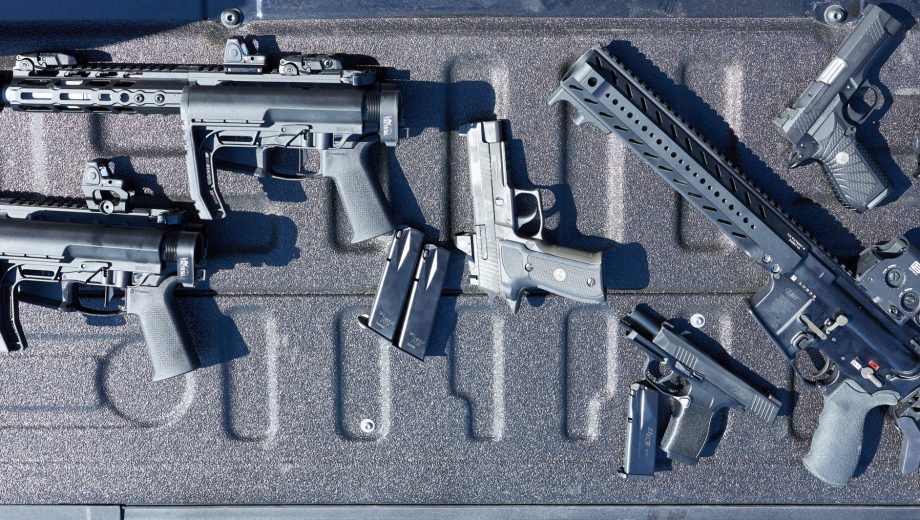 Firearms can be broken down into several basic types: handguns, rifles, and shotguns.   If you are new to guns, here is a simple breakdown.

Handguns, also called pistols, are held with one or two hands, and are typically relatively small and fire a small “pistol caliber” round.  There are exceptions to these general guidelines: some pistols are available with very large caliber rounds (such as the Casual .454 and others) and recently AR pistols have become popular (an AR Pistol is essentially a AR-15 or AR-10 rifle without a shoulder stock).

Handguns come in two primary types: revolvers and semi-automatics.  Revolvers are what you picture if you think of an Old West handgun, or a police handgun from the 70s.  They have a round cylinder that holds the rounds, and spins to move a new round to the barrel to be fired.  Semi-automatics are the more modern style of pistol with a magazine inside the handgrip that holds a the rounds and feeds the up into the chamber as needed.

Rifles are long barreled (typically 16” or longer) guns with a stock designed to be rested against the shoulder for stability.  They can shoot anything from a tiny .22 caliber round up to a giant .50 cal. They come in many flavors, from target shooting .22s to hunting rifles to tactical rifles for various distances and more.

They come in many different actions (an action is the way a new round is loaded up after the previous round is fired) including semi-auto, full-auto, lever action, and bolt action.

A rifle with a barrel length less than 16 inches is a Short Barreled Rifle (SBR) and requires a special application and tax stamp to make, buy, or own.  You can read more about SBRs here: What is an SBR?

Shotguns are similar to rifles, except that they typically fire “shot” a bunch of small pellets instead of a single round.  More technically rifles have a rifled barrel, which means there are grooves cut inside the barrel which cause the bullet to spin as it flies down the barrel.  This spin provides stabilization in flight, just like a football thrown with a spiral.  Shotguns have a smooth bore, i.e. no rifling.   So even if you are shooting slugs through your shotgun, which are a single heavy “bullet”, they don’t spin, distinguishing the shotgun from the rifle.

Shotguns also come in many flavors from defense to hunting to sporting.  The actions are also varied, including semi-auto, bolt action, pump action and the classic break action (where the gun folds open on a hinge in the middle).